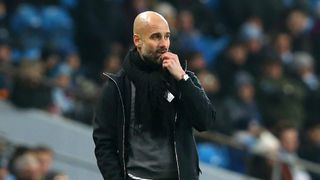 Pep Guardiola refused to comment on the possibility of Alexis Sanchez moving to Manchester City in the transfer window following his side's 4-3 defeat at Liverpool on Sunday.

City remain in the race to snap up the Arsenal forward, who has six months left on his contract at Emirates Stadium, although it has been reported that Manchester United are emerging as favourites.

Arsenal boss Arsene Wenger said earlier in the day the Chilean was "half in, half out" of the north London club, although Guardiola was giving little away when asked if he thought Sanchez was bound for City.

"You know my answer about that, he is an Arsenal player," Guardiola told a news conference after City's 22-match unbeaten start to the Premier League season was ended in a classic at Anfield.

"I don't talk about the players who are not in my team now; unless [they are in it] today. Today would not be good.

"We have the squad we have. I don't know what is going to happen in this transfer window. If we have to finish with these players we are going to finish.

"If we can buy someone, because we have a lot of competitions, a lot of games, we are going to try."

Goals from Alex Oxlade-Chamberlain, Roberto Firmino, Sadio Mane and Mohamed Salah had Liverpool 4-1 up at Anfield, and City were unable to recover despite a late fightback that brought goals for Bernardo Silva and Ilkay Gundogan.

The defeat ends City's chances of going unbeaten throughout the league season, but Guardiola does not believe the result will determine whether the club enter the market.

"I don't think we would say it depends on results to analyse whether you do or don't need it," he added.

"After that defeat you have to think what we have to do, what we believe. What we have to do we have thought since a long time ago and it doesn't change with that result, not at all."