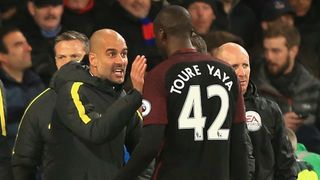 Yaya Toure has accused Pep Guardiola of jealousy and claims the Manchester City coach treated him like a "rival" during the midfielder's final season with the club.

Toure helped City to a third Premier League title at the end of his eight-year stay, albeit he was a bit-part player in 2017-18, starting only one top-flight fixture during the campaign.

Guardiola did select the Ivorian for their final home fixture against Brighton and Hove Albion last month, with the 35-year-old captaining the side in a 3-1 win at the Etihad Stadium.

However, Toure believes his previous history with the coach, who sold the player in 2010 during his time in charge of Barcelona, led to an uneasy relationship during their last year together in England.

"I think I was dealing with someone who just wanted revenge on me," Toure said in an interview with France Football.

"I do not know why but I have the impression that he was jealous of me, that he took me for a rival. There you have it. We always looked at each other weirdly.

"He was spinning around me without saying anything, watching me, gauging me, but not talking to me. Yet he knows that I speak Catalan, Spanish and English. It should be enough to communicate both.

"Every time we passed each other, he seemed embarrassed. As if I made him a little self-conscious. As if, also, he had understood that I knew him perfectly."

Toure also alleged Guardiola used mind games on his players at City, even going so far as to suggest some of the squad ended up "hating" the boss because of his methods.

"Pep likes to dominate and wants to have obedient players who lick his hands," Toure said. "I do not like this kind of relationship. I respect my coach but I am not his thing.

"Like all players, I have bickered with my coaches. But at a certain point, men who do not understand each other reconcile. This is not possible with Pep, who is very rigid.

"The other players will never admit it publicly but some have already told me that they ended up hating him. Because he manipulates and plays a lot with your head."

When contacted by Omnisport, Manchester City declined to comment regarding further allegations made by Toure in the interview.