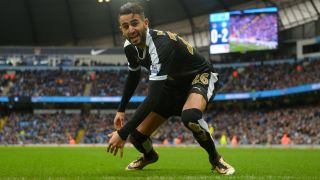 Pep Guardiola did not deny an interest in Riyad Mahrez amid widespread reports Manchester City are keen to tie up a blockbuster deal for the Leicester City winger ahead of Wednesday's transfer deadline.

City completing a £57million swoop for Athletic Bilbao defender Aymeric Laporte but the 23-year-old French centre-back might swiftly lose his status as the club's record signing, with the Premier League leaders understood to be testing Leicester's resolve over Mahrez.

The Algeria winger was one of the stars of the Foxes' improbable title triumph in 2015-16 but his future has regularly been the source of speculation since and City's interest reportedly prompted the 26-year-old's latest transfer request at the King Power Stadium.

Speaking ahead of Wednesday's match against West Brom – where Laporte will be eligible for a debut - Guardiola passed up the chance to distance himself from a move for Mahrez when asked whether he was interested in the player.

"I have interest in a lot of players, in good, good players. There are many," he said.

"The window is open until the 31st. we spoke many times with the club to see what is the best with the players we have.

"Right now, it's the same as what I said about [bids for] Alexis Sanchez, Laporte. It's not the place to talk about that. It is so, so difficult.

"It happened with Laporte because it's a buy-out clause. When you have to negotiate - there are examples from the past - it's always so complicated."

City's apparent last-ditch move for Mahrez appears to have been partly motivated by Leroy Sane being ruled out for up to seven weeks with an ankle ligament injury.

Gabriel Jesus is still more than a month away from returning after medial knee ligament damage according to his manager, who now finds himself slightly stretched in attack with a battle for honours on all fronts still ongoing.

"Right now, we have just three strikers plus Brahim [Diaz]," he added. "We don't have more for the next month or month and a half. Gabriel is coming maybe in the next five or six weeks. We don't have too much and we play every three days.

"Of course, we have to find solutions. We lived this season with no left-back. [Benjamin] Mendy is our left-back but he is six months out. We adapted. Danilo is not natural in that position, and Fabian [Delph] and [Oleksandr] Zinchenko. We did really well.

"We overcame that situation and. If we have to adapt the way we play, we are going to adapt. If David [Silva] or Kevin [De Bruyne] have to play on the wing, we can adapt several positions to do it.

"If things are not possible [with transfers] then nothing is going to happen. What they players have done, I have to trust them because they have been amazing. But, of course, we are thinking about this summer, next summer - the future."

Guardiola urged officials to protect players in the aftermath of Sunday's 2-0 FA Cup win over Cardiff, although he welcomed a Twitter apology from Joe Bennett – the full-back whose challenge left Germany star Sane stricken.

"I said what I said [about referees] in the press conference - what I appreciate are the comments from Bennett," he said.

"He apologised. I don't think the players want to do that [injure opponents]. I know the football is quick, I understand the physicality of the Premier League, I accept it since the beginning.

"I would for prefer Leroy to be with us for the next six weeks, what can I say?"

It seems City and Guardiola would also prefer Mahrez to be with them, with all eyes on Leicester heading into the final day of the transfer window.