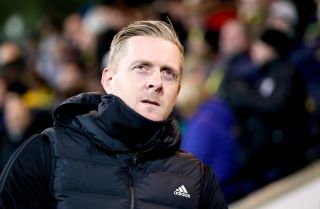 Sheffield Wednesday’s new manager Garry Monk insisted he has nothing to prove after being unveiled as the club’s permanent successor to Steve Bruce.

Monk, introduced at a hastily-arranged media gathering at Hillsborough on Friday, has only spent short periods in charge at previous clubs Swansea, Middlesbrough, Leeds and Birmingham.

The 40-year-old was sacked by Swansea, Middlesbrough and Birmingham and quit at Leeds, two days after owner Andrea Radrizzani completed his takeover.

“In terms of motivation for this club, of course I’m highly motivated, but any more than what I’ve ever been? No,” Monk said.

“I don’t think I’ve got anything to prove. I think I’ve proved in a short space of time as a manager that I know how to manage.

“I’ve improved numerous players and numerous teams from where I took them to where we ended with them.

“Unfortunately everything outside of that, decisions, that’s out of my hands. I can’t control that. That’s up to other people.

“Of course there’s been disappointments along the way. I’ve not been allowed to go longer, but I feel I’ve improved every single club that I’ve been at.”

Monk was controversially sacked by Birmingham in June after 15 months in charge.

The club’s chief executive Xuandong Ren later claimed Monk had wanted to use his agent, James Featherstone, in all transfer deals.

Former clubs Leeds and Middlesbrough, it has been reported, made similar allegations, which Monk has refuted.

He said in a statement released in July that he was considering legal action against all three clubs.

“I will speak about that, but not today,” he said. “Today’s about Sheffield Wednesday. I don’t want to deal with nonsense. It’s not my focus.

“I will speak about that, but at the right time. Right now it’s about Sheffield Wednesday, about the honour of being here, the excitement to be here and getting to work.

The Owls have won three and lost three of their first six Sky Bet Championship matches under Bullen to sit 11th in the table.

“I know how powerful a club this is and the history and the tradition of the club,” added Monk, who had a 15-game spell on loan with Wednesday as a player during the 2002/03 season.

“And I know the backing that the chairman has given the club over the years. It is a great opportunity and one I am excited about.”