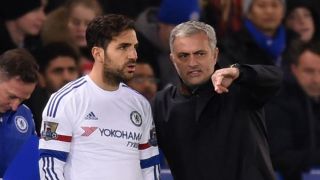 Just seven months after claiming a third top-flight title in his second spell at the helm, Mourinho left the club in 16th position and just one point above the relegation zone after 16 matches.

Reports then emerged that Fabregas had tried to sabotage the Portuguese's tenure and would rather lose to bring his exit nearer than try to win – claims which he denied.

The Spaniard insists he has nothing but affection for Mourinho and expressed regret the players let him down.

"A lot has been said and many, many wrong things. I love Jose, I consider him my friend – we still keep in touch," said Fabregas on Sky Sports. "Some of the things said were unfortunate, but I have huge respect.

"I think Jose's biggest problem was he trusted us too much. He gave us more holiday because we were champions, he believed in us more, he trusted us more, and we let him down – the whole team.

"And that was the main reason why at the end he had to go and for that, myself, and all the team I think, feel bad for that."

Guus Hiddink replaced Mourinho at the helm until the end of the season and has steered the club to 10th position, with Fabregas enjoying playing under the Dutchman, who he says has given him greater license to dictate the play.

"Under Guus, at the beginning when he came and things were not completely right, he tried to have stability in midfield," added the Spaniard.

"He started playing many games with [John] Obi Mikel and Nemanja Matic, with me or Oscar at number 10.

"He came to talk to me and he wanted me to assist his coaching, to come deep, get the ball and make the team tick from deep positions.

"He wanted me on the ball all the time and for me it's fantastic because it's the game I love to play and it helped for my confidence."

Antonio Conte will take charge at Stamford Bridge next season and Fabregas believes he is just the type of coach Chelsea need.

"You can see he loves offensive football, tactically his teams are organised. What I've heard is he has discipline, he's competitive, he's a winner, and that's what we need, someone who is always on our back," said the midfielder.

"[He is] someone who wants to win straight away, no transition. I'm sure he will make the best team he can."