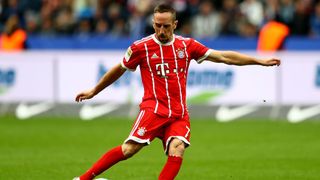 Franck Ribery was delighted to get a ball back at his feet on Tuesday as he continued his rehabilitation from a knee injury.

The Bayern Munich winger tore the lateral collateral ligament in his left knee during his side's 2-2 draw away to Hertha Berlin earlier this month and was expected to be out of action until 2018.

Ribery has since claimed he would be back before the mid-season break, and he appeared to be progressing positively on Tuesday.

The former France international posted a short clip on Twitter of him doing kick-ups, still wearing a knee brace, along with the message: "I missed you my friend #progress #comeback #work #MiaSanMia #fr7 @FCBayern."