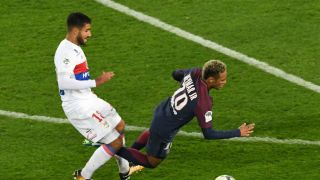 Ligue 1 leaders PSG travel to Lyon on Sunday and the famously outspoken Aulas has again been stoking the fires of the rivalry.

Neymar has scored 15 times in France's top flight since joining for a world-record €222m from Barcelona in August, including a four-goal haul in the 8-0 demolition of Dijon during midweek.

France international Fekir also has 15 to his name this term and Aulas, whose club lie third and 11 points shy of PSG, would not swap his man for the Brazil superstar.

"I was already watching PSG without Neymar, inevitably he brings something more," he told Le Figaro.

"I prefer Nabil to Neymar. Do not put that in the title because Neymar will want to prove the opposite on Sunday against us!

"Nabil is our little Neymar. And [Bertrand] Traore looks a lot like Neymar in his dribbling, his way of accelerating.

"We are not outdone at OL [Lyon], with our means."

Aulas has resumed his customary theme of criticising PSG's lavish spending this week, prompting the capital club to tweet accusing him of "fake news" on Friday.

Asked about his motivations for persistently commenting on the Qatari-owned club, Aulas replied: "Do not mix everything up. On the one hand, there is a match between OL and PSG, and on the other, a battle of ideas between a sustainable economy of football, ours, and an economy, I would say, a little artificial.

"On the one hand, there are private investors who put in their own money with liberal competition rules and, on the other hand, an anomaly with state funds investing in much larger proportions.

"The budget of the first, PSG, is of the order of €800m and four times higher than that of the second, OL. And we play in the same competition."

Aulas also voiced concerns over PSG essentially ringfencing one of Ligue 1's Champions League spots with their financial might but he will be in their corner when they face Real Madrid in the last 16 next month.

"I applaud PSG with both hands," he added. "Against Real Madrid in the Champions League, even though their president Florentino Perez is a friend, I will obviously be a supporter of PSG.

"My reluctance does not concern him but the model in which he fits."