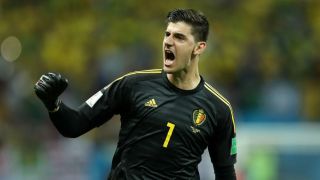 Thibaut Courtois had a defiant message for his detractors after a fine display in Belgium's quarter-final win over Brazil, adamant he proved himself after "unfair" criticism.

Courtois did not enjoy the best of seasons at Chelsea in the Premier League, with some putting his slight dip in form down to an uncertain future amid transfer rumours.

But he showed just why he has regularly been considered one of the world's best goalkeepers on Friday in Kazan, producing a string of vital saves – including from Neymar late on – as Belgium managed to cling on to a 2-1 win and reach the World Cup semi-finals.

"I know Neymar likes to curl it that way, I was ready and made a good save," Courtois said of his late stop to BBC Sport.

"I have been unfairly criticised a lot this year, today I proved again who I am and why I am here.

"Our tactical plan was great. We felt it was our day. It is a childhood dream to be in the World Cup.

"It's incredible. This team wants to win every game, against England people said it was better to lose but we won the game, we have confidence in our team."

Kevin De Bruyne, meanwhile, acknowledged that keeping up with Brazil at times in the second half was a struggle, but he saluted the Red Devils' character.

"It's not easy to play Brazil, they are a wonderful team," De Bruyne said. "But the power we have as a team showed today. We were magnificent in the first half.

"Second half it was very difficult, they had a lot of players in the middle. In the last 15 minutes it was a character test and we showed the world what we are capable of."