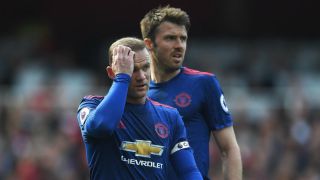 Wayne Rooney wants to leave Manchester United so he can get more first-team football, in the view of Bryan Robson.

After making what could be his last United appearance as a late substitute in the Europa League final on Wednesday, Rooney revealed he has "lots of offers from England and abroad" and is close to reaching a decision on his future.

The forward struggled to establish himself in Jose Mourinho's plans for United this season, starting only 15 Premier League games and scoring five goals.

Robson, formerly United's captain and now a club ambassador, knows the current skipper well and thinks he will opt to join a new team for the 2017-18 season as a result of his reduced role.

However, he is confident Rooney still has plenty to offer at the highest level despite speculation linking the attacker to lucrative moves to China or the United States.

"I would be very surprised if Wayne is with us next season because I think he wants to move on to get first-team football," Robson told BBC Sport.

"Wayne is one of those players who loves to play week in, week out. You get the best out of him that way and that hasn't happened for him this year.

"But when you break records like Wayne has, the England goalscoring record, Manchester United scoring record, all the appearances and amount of trophies he has won, you have got to be a top class player and people should remember that."

Rooney has been left out of the England squad to play Scotland and France next month – the second straight selection he has missed out on.

And Robson, who does not agree with the decision, feels it would have come as a massive blow to the 31-year-old just 12 months out from the World Cup in Russia.

"I know Wayne really well and he will be really disappointed that he has been left out of the England squad," said Robson.

"I hear people saying he hasn't been a regular, but he has been involved with the squad all the time, he has been training, he has played a lot of the league games of late.

"When people say he shouldn't be in the squad because he hasn't been playing regularly, well that's a nonsense."