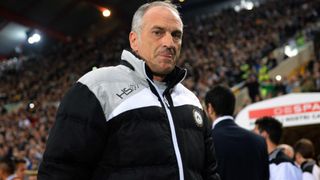 Francesco Guidolin has revealed he used to show his Udinese players videos of his new club Swansea City in action.

The 60-year-old was named as head coach of the Premier League club on Monday and will oversee first-team affairs alongside manager Alan Curtis until the end of the season.

Guidolin guided Udinese to a Champions League spot in 2012 and has claimed he used footage of Brendan Rodgers' Swansea side as inspiration for his players at the time.

"I remember when Brendan Rodgers was Swansea's manager, and Swansea played very, very well," he told the club's official website.

"When I was at Udinese I showed the players a video of the styles of Swansea.

"Now it's different - but the important thing is to win."

Guidolin is confident he can help guide Swansea to safety this season, even though they head into Monday's clash with Watford in 18th place in the table and two points adrift of safety.

"It's a very good opportunity for me at an important club," he said. "At the moment it's not a good situation for the club, but we have a good team.

"In Italy, I helped my team finish in a good position in the table, and that's what I hope to achieve here at Swansea.

"At the moment everything is new to me, so I need three or four days to talk to the staff and players. After that, I will have a precise idea of things."

Guidolin says Curtis' place as a Liberty Stadium "legend" will help him to acclimatise to life at the club.

"Alan Curtis is a legend at Swansea, and this is important for me. He knows everything about the club," he added.

Guidolin is set to be in the dugout for Sunday's trip to face Everton.