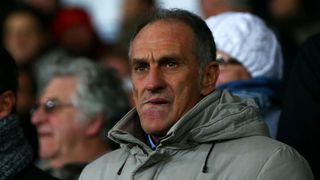 Swansea City head coach Francesco Guidolin says he put himself forward as a possible candidate to coach Watford prior to their Premier League promotion.

Former Udinese coach Guidolin was appointed Swansea boss for the remainder of the season on Monday and watched from the stands as his new side beat Watford 1-0 at the Liberty Stadium that evening.

The 60-year-old had been working as an advisor to the Pozzo family - owners of Udinese, Watford and Spanish club Granada - since May 2014 and harboured ambitions of coaching Watford prior to their promotion-winning campaign last term.

Asked by La Gazzetta dello Sport why he never took the reins at Watford, Guidolin said: "I honestly don't know. I think I did some great work at Udinese. I let them know that I would have liked to work at Watford, even in the Championship, but other managers were hired.

"Given their results, which includes promotion and their good form in the Premier League, they made the right decision. I would have liked to work there, but this is how things played out and I accept it.

"I never felt as though Italian football had abandoned me and I must thank all the sides that tried to sign me during that time [after Udinese].

"However I preferred to wait as I wanted to experience something outside of Italy and in the end I was rewarded."

Guidolin will take charge of his first Swansea game against Everton on Sunday after Ashley Williams' header on Monday moved the Welsh club out of the relegation zone.

"The initial signs are encouraging. I was impressed by how cordial everyone was," Guidolin added.

"The first half against Watford was our best performance in some time. I have been following Swansea for the past month and I am convinced we have a great base to work from.

"I will try to implement my work on things that make a big difference like focus, concentration and intensity while trying to get them to play good football."