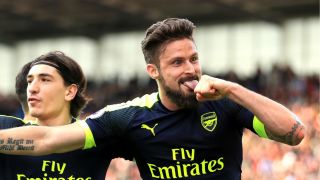 Olivier Giroud scored a double as Arsenal overcame Stoke City 4-1 but the striker will be a West Ham fan for a day on Sunday.

Arsenal's victory moved them one point behind fourth-placed Liverpool, who still have to travel to London Stadium for a match against Slaven Bilic's side this weekend.

If Liverpool fail to secure maximum points they will leave the door open for the Gunners to pip them to Champions League qualification with wins in their final outings against Sunderland and Everton.

With so much on the line, Giroud has no problem switching allegiances to another club from the capital for the short term.

"Obviously we have to do the job. We have to focus on our games but to be honest with you I will be a big fan of West Ham tomorrow! They have all my support," the Frenchman told Sky Sports.

Of Arsenal's performance at the bet365 Stadium, he said: "We were efficient up front and defensively were compact and defended well from the front.

"It's a great win and we've got two more finals to come.

"The most difficult thing against a team like Stoke is scoring the first goal and after that we had to be efficient."