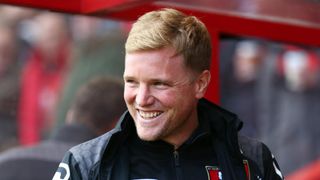 Jordon Ibe says he is looking forward to returning to a style of play similar to Brendan Rodgers' when he turns out for Eddie Howe and AFC Bournemouth.

Howe has been linked with the vacant England role, but Ibe is hopeful the Bournemouth boss stays put, likening his style to that of former Liverpool and current Celtic manager Rodgers.

"It is a great opportunity to make another step in my career and develop as a player.

"I like the philosophy the manager has got here and there are a lot of good, young players so it's a good place for me to kick on and do well.

"I like the style of play and he's a very good manager. He has a lot of young players here and I believed everything he told me.

"The team play the same style of football as Brendan Rodgers used to play at Liverpool, which is something that I like.

"It's been five seasons at Liverpool. But this is a great opportunity for me to help take another step in my career and develop as a player.

"I can bring pace and power and hopefully some goals. I want to be skilful and help the team to do well."

And Ibe says anything is possible at Bournemouth, highlighting Leicester City's Premier League triumph last season as evidence that the right attitude and team mentality can go a long way to winning the English crown.

"Leicester were in the same position two seasons ago and ended up winning it," he said.

"Even if we aren't winning it we are aiming to get higher in the league and hopefully beat some of the big teams."