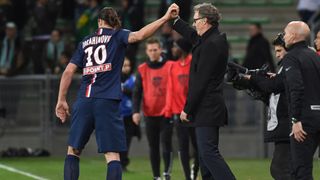 The 34-year-old announced on Friday he was leaving the club at the end of the season, ending a four-year stint in the French capital.

Ibrahimovic has won four Ligue 1 titles and three Coupe de la Ligue crowns at PSG and will attempt to add a second Coupe de France to his list of honours in the final with Marseille on May 21.

The Sweden striker has scored 36 league goals this season and news of his departure will have put a host of top European clubs on alert.

"Zlatan has greatly moved the club," Blanc told a media conference ahead of Ibrahimovic's final game at Parc des Princes against Nantes this weekend.

"Now, we have to think about the future."

Blanc said there had been discussions with Ibrahimovic about a new deal, as he spoke about his disappointment at the striker's exit.

"There have been talks. Personally I am sad because we lost our best player, but sad in the sense that this time had to come," Blanc added.

"At the same time I'm hopeful – for him first. And I think the club have to start on something else."

Ibrahimovic is battling a calf injury but - while Blanc has advised him not to play against Nantes - the PSG boss expects the former Barcelona striker to feature and try to break Carlos Bianchi's French top-flight record of 37 goals set in 1977-78.

"I hope he can participate in this game," Blanc said.

"I advised him not to do anything. There is an important match against Marseille in the final of the Coupe de France, and the Euros with his national team.

"But I think he will not listen to me and he will want to play the game at all costs. He'll want to beat the record of Bianchi. It makes sense."