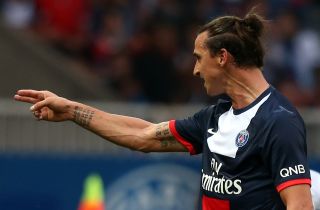 The Sweden international was accused of imitating firing a gun towards the Toulouse bench in the Ligue 1 clash, which PSG won 2-0.

Ibrahimovic's actions were met with disapproval by the French game's governing body, the LFP, who summoned the former Barcelona and Inter man before a disciplinary committee.

However, the 32-year-old has escaped any serious punishment, with the LFP opting to reprimand the in-form striker.

An LFP statement read: "Upon hearing the player's representative Olivier Letang and Mr Roman Voillemot (Counsel) and reading the letter of explanation from Toulouse FC, the commission has sanctioned for Mr Zlatan Ibrahimovic a reprimand for his inappropriate gesture towards the Toulouse FC bench."

The decision means that Ibrahimovic can travel with the squad for the trip to Saint-Etienne this weekend, to face a side who took four points off PSG last term.

Coach Laurent Blanc will hope that the Swede can continue his superb recent form as they look to cement their place at the top of the table.

Ibrahimovic has scored 11 goals this season, with six of those coming in PSG's last two victories against Bastia and Anderlecht.