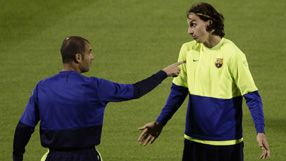 The 30-year-old Swede endured a fractious relationship with the Nou Camp supremo, after arriving as part of a swap deal for Cameroonian Samuel Eto’o with Inter Milan.

Despite scoring 21 goals and contributing nine assists for the Catalan club during his one year under Guardiola’s reign in 2009/10, the former Juventus and Inter striker soon returned to Italy with Milan.

And the Swede pulled no punches when questioned on his exit from the reigning Spanish and European champions.

“When I left Barcelona, I said to myself: ‘I’m leaving the best team in the world but there is a person having a problem with me. He’s not a man, not telling me what the problem is. But without knowing what the problem is, I will be the man and I will leave’,” Ibrahimovic says in the May 2012 issue of FourFourTwo magazine.

“For a couple of months I was walking around trying to get answers but I didn’t get any, so at the end I said: ‘This is bulls**t’, I don’t need this, I will go somewhere I know I will get answers and where I can play my game.”

Ibrahimovic returned to Catalonia on Tuesday as Milan, for whom he has netted 29 goals this season, bowed out of the Champions League following a 3-1 defeat to Barcelona, after two Lionel Messi penalties and an Andres Iniesta goal steered the holders into semi-finals.

Read the full in-depth interview with Zlatan Ibrahimovic in theMay 2012 issue of FourFourTwo magazine– out now.

It features a one-on-one interview with Fabrizio Ravanelli and takes a thorough look at how Harry Redknapp has become ‘the people’s choice’ for England from those who know him.

It also reveals the top 50 Football League players, talks to Zico, Oriel Romeu and Milan Baros and travels to China to see how Shanghai Shenhua are attempting to build a football superpower in the Far East. Subscribe!