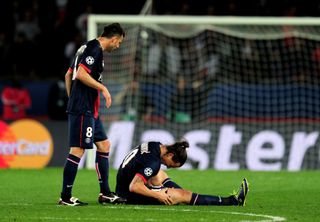 Ibrahimovic has missed PSG's last six games because of a hamstring injury sustained in their 3-1 UEFA Champions League quarter-final first-leg win over Chelsea at the beginning of the month.

The Sweden striker's absence was felt as Laurent Blanc's men succumbed to elimination from the Champions League in the second leg against Chelsea, who beat PSG 2-0 at Stamford Bridge to progress on away goals.

PSG's performances minus Ibrahimovic have been largely disappointing, with Sunday's 1-1 draw at Sochaux acting as another illustration of their lack of firepower without the former Barcelona and Juventus man.

But the defending Ligue 1 champions, who can retain their crown with a win over Rennes or if Monaco fail to beat Guingamp on the same day, could soon be boosted by the return of Ibrahimovic, who is described by the club doctor as having a "90 per cent chance" of facing Philippe Montanier's men.

"He has resumed running and there is a 90 per cent chance that he will be at the coach's disposal in 10 days," PSG doctor Eric Rolland told L'Equipe.

Ibrahimovic has scored 40 goals in 43 games for PSG this season.