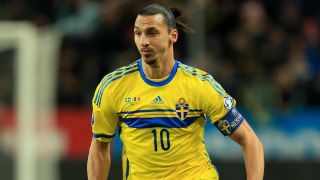 The man responsible for Zlatan Ibrahimovic joining Ajax claims the striker is one of the three greatest players of all time.

Scout John Steen Olsen spotted Ibrahimovic playing for his hometown team Malmo and persuaded Ajax to take a chance on him.

He moved to the Eredivisie in 2001 and has never looked back, subsequently playing for Juventus, Inter Milan, Barcelona and AC Milan before moving to Paris Saint-Germain in 2012.

Steen Olsen, 72, believes the Sweden international is better than modern-day greats Lionel Messi and Cristiano Ronaldo and lists him in his personal top three.

"I could see immediately that he had something special but I did not think he would become such a big star," said Steen Olsen in a Fox Sports documentary entitled 'The man who spotted Zlatan'.

"He was big, good technically and could read the game.

"When we signed him I was so happy. He was pleased to go to Ajax. Every time I went to Amsterdam he would say 'John, come and look at my new car'. I always said I had already seen it but he always had another car to show off!

"Zlatan is fantastic and, honestly, I get angry when people say bad things about him. He is an intelligent and pleasant guy. He's the best player I ever recommended to Ajax.

"For me there are three players: Pele, Johan Cruyff and Zlatan Ibrahimovic. They are the three best players ever."

Steen Olsen continues to work for Ajax and is also credited with taking Viktor Fischer and Christian Eriksen, who is now with Tottenham Hotspur, to the club.