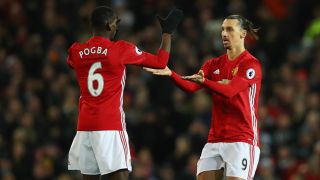 They remain the benchmark for Manchester United teams but former captain Gary Neville believes the likes of Zlatan Ibrahimovic, Paul Pogba and David de Gea would be good enough to play in the 1999 treble-winning side.

It was a season to remember for Alex Ferguson's United, who became the first English team to win the treble after claiming the Premier League, FA Cup and Champions League 18 years ago.

Now led by manager Jose Mourinho, Ibrahimovic and his team-mates are trying to re-establish United's winning mentality in the Premier League, having not added to their last title in Ferguson's farewell season in 2012-13.

It has been a topsy-turvy campaign for the 20-time champions at Old Trafford, but Neville believes United's current stars would not look out of place alongside Ferguson's legends, despite the team's mixed fortunes.

"I think there's quite a few who would be able to play in that team," Neville told Omnisport.

"You have to remember, these players now it might be that they're not as good of a team yet as the 1999 side but individually there are some outstanding players in the current squad that could play in that team no doubt.

"There are some outstanding players. Ibrahimovic, [Wayne] Rooney, [Henrikh] Mkhitaryan, Pogba, [Eric] Bailly, [Antonio] Valencia, De Gea. They are all top players who can play at the highest level.

"Individually, you could definitely get to a point whereby one or two individuals could come into that team and still be very, very strong."

United have the chance to not only boost their Champions League hopes on Sunday but impact the Premier League title race.

Mourinho's men - sixth in the table and six points adrift of fourth-placed Liverpool amid a 21-match unbeaten run in the league - welcome leaders Chelsea to Old Trafford.

United are also in the quarter-finals of the Europa League against Anderlecht, which is looming as their best option to qualify for next season's Champions League.