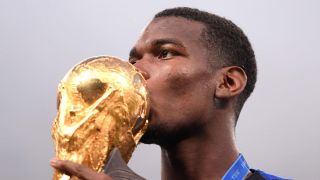 And after a season in which Pogba's displays for Manchester United were often scrutinised, Ibrahimovic was quick to highlight his former Old Trafford team-mate's display.

"Let them talk, but the game speaks for itself," Ibrahimovic posted on Twitter, tagging Pogba alongside a picture of him holding the World Cup trophy.

Pogba and Ibrahimovic were both signed by United boss Jose Mourinho prior to the 2016-17 season, though the former Sweden international left for LA Galaxy in March.