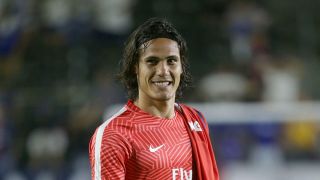 Edinson Cavani insists he is not motivated by overhauling Zlatan Ibrahimovic's place in Paris Saint-Germain history.

Cavani scored a second-half brace and also had a penalty saved as Unai Emery's men thrashed Bastia 5-0 in Ligue 1 on Saturday, moving him on to 47 for the season in all competitions.

Cavani is closing in on 128 but he told television reporters: "The objective is to win, not to beat Zlatan Ibrahimovic's goals record. With time, maybe I will beat his record but it's not the objective.

"I'm here and I'm staying because I want to win a lot and pick up more trophies.

"I don't know if people will remember me more that Zlatan, that's not what I'm working for.

"I'm just here to try to improve the team and keep growing. We're all working for the same objective."

Those efforts seem likely to be frustrated in Ligue 1 for the reigning champions this time around.

Victory over Bastia drew PSG level on points with Monaco but the leaders faced Nancy later on Saturday in the first of two games in hand.

"It was a very important win for us," said Cavani. "Yeah, I still believe we can win the title. In football, anything can happen.

"I think we deserved this win, we played very well. We need to keep going like that.

"I work for this, to score goals. I am happy. Forwards need to score a lot."

Bastia remain rooted to the bottom of the table and must observe the remaining weekend fixtures anxiously.

The Italy midfielder fired into the top corner from long range but Bastia goalkeeper Jean-Louis Leca was furious as he had just finished tending to Blaise Matuidi – the France midfielder who was down injured in his six yard box – and Julian Draxler was stationed in an offside position in front of him.

"I'm disgusted with the second goal," Leca said. "Matuidi was hurt, I went to pick him up, they played quickly and scored.

"That's not the reason we lost this match though. Paris are a top club and when you concede five goals it is because you have not played well.

"If I didn't believe we could stay up I'd have already gone to the president asking him to break my contract."