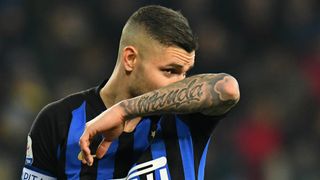 Mauro Icardi will still be offered a new Inter contract despite being replaced as the club's captain due to his behaviour, according to chief executive Beppe Marotta.

Icardi, who has been linked with a move to Real Madrid, was stripped of the captaincy this week with goalkeeper Samir Handanovic installed as his replacement.

The striker subsequently pulled out of the Inter squad to face Rapid Vienna in the Europa League, using Instagram to hint he was being treated for an injury.

Icardi, whose wife Wanda Nara is his agent, was not named in the squad for Inter's Serie A game at home to his old club Sampdoria on Sunday, the Argentine taking a watching brief from the stands at San Siro.

Inter are yet to give a formal reason in public for the move to strip Icardi of the captaincy, but Marotta confirmed the decision was made by coach Luciano Spalletti.

"It was not a disciplinary matter against the lad," Marotta said to Sky Sport Italia. "But rather a change that we considered better for the team, club and Icardi himself.

"It was not degrading for him, but sometimes these changes have to be made. Icardi is only 25 years old, let’s not forget, it’s unfair to expect too much from him. We wanted to keep the culture of victory and winning mentality, to cultivate it.

"It's a growth process and we decided to make this change to help everyone progress together as a group. Sometimes the head of a household has to take an unpopular decision for the good of the familly."

| #Spalletti: "It's a step towards fairness in terms of Inter and the squad. It was not a decision taken against Icardi, but rather a decision in favour of Inter. Fairness for the team goes before anything else." #InterSampdoria#FCIMpic.twitter.com/UwQ31X2N6k— Inter (@Inter_en) February 16, 2019

Tensions between Inter and Nara have reportedly grown over the ongoing Icardi contract talks and this week her car was attacked, an incident Spalletti has condemned.

"I exchanged some messages with her and showed our utmost solidarity, because let's not forget also there are five children involved here. It was absolutely unacceptable," Marotta added.

"She was very nice and appreciative of our affection, as she always has been. We have never had a problem dealing with her.

"I told Wanda, as the player's representative, that we will send a [contract] proposal over the next few weeks. There are some issues to be dealt with first and we must evaluate some figures. The contract has nothing to do with it."

There has been speculation over the severity of Icardi's apparent injury but Marotta says Inter have no reason to doubt the striker's honesty over the issue.

"When a player feels pain, it is our duty to believe them," he said. "We will see if his condition improves. We have a long campaign, we want to continue in the Europa League too, and we trust this will be resolved.

"It was said you don't air your dirty laundry in public, but that's impossible nowadays with social media and constant coverage, so we had to be open.

"The armband is not just symbolic, the person who wears it must be considered a leader. We want to all grow together and eliminate certain toxins that had perhaps crept in during recent months.

"I read many things, but the contract has nothing to do with it. The negotiations will continue in the predicted timeframe and we will make our proposal at the right time.