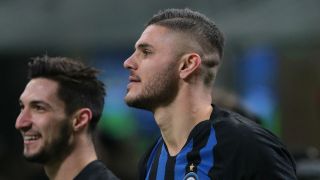 Mauro Icardi seemingly suggested he would not be commenting on his situation at Inter in a cryptic social media post on Thursday.

The striker was stripped of the Nerazzurri captaincy ahead of the Europa League tie with Rapid Vienna, with the role instead handed to Samir Handanovic.

The decision was described by both coach Luciano Spalletti and sporting director Piero Ausilio as "painful".

Icardi then pulled out of the squad for the Europa League clash and appeared to hint at an injury on social media.

And after a 1-0 Inter away win, secured with Lautaro Martinez's penalty, Icardi again took to Instagram, although he looked to be reluctant to openly address the week's developments.

Quoting the famed American writer Mark Twain, Icardi wrote: "It's better to keep your mouth shut and appear stupid than open it and remove all doubt."

Icardi's future at San Siro has long been the subject of speculation as Wanda Nara, his wife and agent, has so far failed to agree on a new deal.

She is reported to have angered some at Inter by suggesting Icardi is not protected enough from negative news.

Ausilio insists the club are not looking to sell the Argentina international.