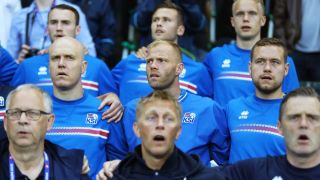 Eidur Gudjohnsen says singing the Icelandic national anthem before his team's major tournament debut was one of the proudest moments of a long and distinguished career.

Gudjohnsen, 37, is among the oldest players at Euro 2016 and was an unused substitute as the newcomers held Portugal to a memorable 1-1 draw in Saint-Etienne on Tuesday.

The veteran striker has won La Liga and the Champions League with Barcelona as well as the Premier League at Chelsea.

But being part of the national team's first appearance on international football's big stage ranks right up there with those achievements.

"It's always the same feeling, it's a proud moment," he said of the emotions he experienced before kick-off at Stade Geoffroy-Guichard.

"But at such a big stage, it's something special. To hear the fans singing ... for the last half an hour you could only hear the Icelandic people, that says enough about the performance itself, I think.

"It's one of my, and our, proudest moments in the history of the Icelandic national team. I think we've already made history by being here and I think today we showed exactly why."

Up next for Iceland on Saturday is a match against Hungary, who lead Group F after beating Austria 2-0 in Bordeaux.

Asked what the squad's focus will be after their strong start, Gudjohnsen said: "We take this result in.

"We're very proud of it as a team. And we know we're going to have to do more if we want to qualify from the group. We'll prepare the same for the next game."

Portugal captain Cristiano Ronaldo dismissed Iceland as having a "small mentality" following their rearguard action, but Gudjohnsen believes they deserve more credit for a dogged display.

"It was an amazing, hard-working performance," he said.

"Defensively we were very solid. Everything that got through our defence the goalkeeper took care of, apart from the goal.

"We know that we're going to concede the ball for the majority of the game. It's not an easy thing when you have to settle for that and be happy with defending. But that's what we showed. We showed a lot of pride in our defending."