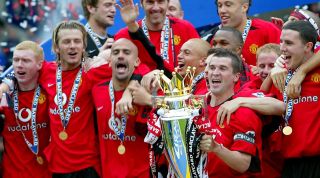 Jason McAteer has reignited his long-running feud with former Republic of Ireland team-mate Roy Keane by criticising his obsession with silverware.

McAteer and Keane first fell out when the former was critical of the latter's decision to walk out on his country on the eve of the 2002 World Cup.

The pair also clashed on the pitch in August 2002 while McAteer was at Sunderland and Keane was at Manchester United.

In a recent interview with Off The Ball, Keane mocked former Stoke and Ireland striker Jon Walters for failing to win a trophy during his career and for "crying on TV about his family situation".

And McAteer has leapt to the defence of Walters and called out Keane for his comments.

"We all know Roy, he says what he wants and that’s why he’s box office because he says it how he thinks," the former Liverpool midfielder told talkSPORT.

“It’s very watchable at times, but unfortunately I do feel he lets himself down with the comments he makes about other players and I was disappointed that Roy come out and said some of the things he did.

“Jonny is a brilliant guy and he’s an advocate for mental health. He’s gone on telly and put himself out on a limb because he feels it’s going to help people, and it is. We need to create more awareness of mental health these days and what people go through, certainly elite sportspeople because it’s a very demanding environment and unfortunately when you come out of it it leaves you with problems sometimes.

“Jonny feels the need to come out and help people, which is fantastic, you take your hat off to him for that. So for Roy to bring him down and suggest he needs to stop crying on the telly, it was a poor comment.

“I think he got wrapped up in the environment, everyone was laughing, there was a lot of people in the audience and he maybe got a little bit too comfortable with his comments and he let himself down.

“As far as of the other comments between them, they are Roy’s opinions and Jonny has come out and said what he needed to say about the situation, and it’s just whose story you believe.

“Roy does like the medals one, but at the end of the day you can’t take the medals down the pub and have a pint with them. They don’t talk back to you. I’d rather have a couple of mates than a couple of medals, to be honest.”