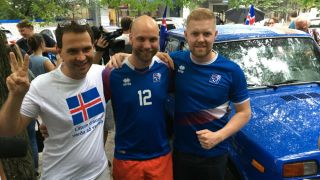 For many teams and supporters at the World Cup in Russia, the logistics of reaching and traversing the world's largest nation have been challenging enough.

But, not content with their status as one of international football's loudest and most dedicated fan bases, two supporters of Iceland have followed in the intrepid footsteps of their Viking forebears and embarked on an extraordinary journey to follow Heimir Hallgrimsson's side.

When Kristbjorn Kjartansson won a Lada Niva - the venerable Russian interpretation of the 4X4 first produced in Soviet times - in a competition, the account manager with the Icelandic postal service and his friend, filmmaker Gretar Jonsson, began to hatch a plan.

"Well, we already decided we would go to the World Cup, [then] I won this car in a lottery back home," Kjartansson said.

"Right away we started a joke, 'why don't we just drive this car to Russia, it's a Russian car'. It started to sound too good of an idea to pass up. So we just did it, and here we are.

"Both of us are great fans of Nivas. They were very popular in Iceland 20 or 30 years ago, but you can rarely see them today, especially in good condition."

After boarding a ferry to Denmark, the pair have driven through Germany, Poland, Lithuania, Latvia and into Russia, where they arrived in Moscow for Iceland's 1-1 draw with Argentina.

A journey south to Volgograd for the 2-0 defeat to Nigeria followed, and on Saturday they arrived in Rostov-on-Don, covering over 5,400 kilometres in their adventure so far.

"The car has been working great," Jonsson said, Kjartansson having ensured new tyres and brakes were fitted before their departure.

"We had minor problems with the cooling fans, but we stopped and met some local guys who fixed it up for us real nice."

Much has been made of the extraordinary proportion of Iceland's tiny population of 330,000 who have dedicated their time and energy to cheering the team on.

The relationship works both ways, though.

Asked if any members of the team are aware of their undertaking, Kjartansson replied: "I think they all know!

"Some of the players from the team are following us on Instagram. It's an honour that they want to watch our trip."

Yesterday, Kristbjorn Kjartansson and Gretar Jonsson told the media here in Rostov-on-Don all about their remarkable trek across Europe and Russia in a Lada Niva June 25, 2018

The loss to Nigeria dealt a major blow to Iceland's hopes of progressing, leaving them needing to beat Croatia, who are already qualified as winners of Group D, while also praying for a favourable result in the match between the Super Eagles and Argentina.

"We are hoping for a good result and for the team to advance," Jonsson said.

And when the spell is finally broken, the two men could return to reality with an expensive bump.

Asked how much money they have spent on petrol, Jonsson sheepishly said: "We haven't put it all together. Now we'll just pay and worry about how much we spent when we get back home."