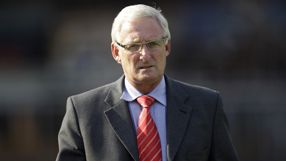 Igesund said his squad, hard hit by injury, the retirement from international football of captain Steven Pienaar and a match fixing scandal that led to a temporary suspension of top officials, was on the right path.

"I'm very confident that the team can go out and shock people," he told a media conference on Monday as the South African squad continued their pre-tournament preparations for the three-week finals, which start on January 19.

"This is a new era for the team, everyone one in the squad is very competitive and fighting for their place in the starting line-up. I think the squad is well balanced and I'm very excited about what they can deliver."

South Africa, drawn in Group A with Angola, Morocco and the Cape Verde Islands, began the year with a world ranking of 56 but have since slipped to 87.

Igesund replaced the sacked Pitso Mosimane in June after South Africa made a slow start to the 2014 World Cup qualifiers - drawing with Botswana and Ethiopia.

Igesund said South Africa, who won when they previously hosted the 1996 Nations Cup, could go all the way to the winners' podium on Feb. 10 but would need a more hearty support from a skeptical South African public.

"We are hosting the tournament and it is important to get the public behind us and for them to start believing in the team. We can really go far with good passion from the people."

He said his team would seek to convince supporters of their potential with a strong performance on Tuesday when they host Norway in Cape Town in a warm-up friendly.

"We are looking for a complete turn around from what people have seen in past games. We are going to play with flair. "Fans don't realise what kind of lift their support can give the players," Igesund added.

Ticket sales for the tournament have been slow, officials said. The Nations Cup traditionally suffers from empty stands for matches not involving the host nation.