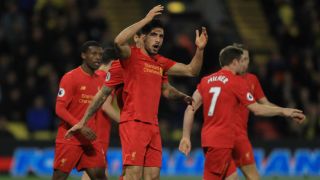 Jurgen Klopp does not believe Emre Can is capable of scoring a better goal than the sublime acrobatic effort that helped Liverpool sink Watford 1-0 at Vicarage Road.

The Germany international flung himself at Lucas Leiva's clipped pass into the penalty area on the stroke of half-time and connected with a perfectly executed bicycle kick that flew into the top-left corner.

Adam Lallana, who returned from a five-week absence as an early substitute for the injured Philippe Coutinho, had hit the crossbar with the game goalless, while the woodwork came to the Reds' rescue in second-half injury time to keep out Sebastian Prodl's stinging half-volley.

But Can's wonder goal ultimately made the difference as Liverpool capitalised on slip-ups from rivals Manchester City, Manchester United and Arsenal on Sunday in the race for a Premier League top-four finish.

Speaking to Sky Sports about Can's strike, Klopp said: "I would like to say I am used to it, but it's not the truth, especially not from Emre!

"It's deserved, you need in football a lot of times this kind of luck. [We had a] lovely volley from Adam Lallana that hit the bar, then in the last minute a Prodl stunner on the bar also.

"We needed some luck, we worked hard for it.

"He did well in the last few weeks since his calf is sorted. Even he can play better than he did tonight, but I'm not sure he can score nicer goals!"

Liverpool's win means they are four points clear of United, who have a game in hand, with three matches remaining but Klopp is refusing to rest on his laurels ahead of Sunday's encounter with Southampton at Anfield.

"We have five or six days to prepare for Southampton. Anyone who sees Southampton this season knows that's tough," he added.

Opposition boss Walter Mazzarri was left frustrated by Can's moment of brilliance and claimed Watford were unfortunate to be on the losing side.

"We didn't deserve to lose. We were a team that was very unlucky. We played against a team that creates five or six chances on goal," he said.

"Their wonder goal means nothing is going on our side because it was the first real chance they had - and it wasn't really a chance - and they took it."