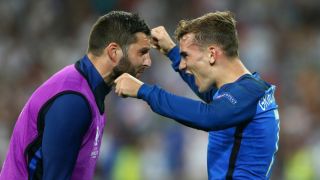 A thrilled Antoine Griezmann hopes he can one day reach Michel Platini's European championship record after his double against Germany booked a place in the Euro 2016 final against Portugal.

The Atletico Madrid forward moved on to six goals at the tournament after he followed up his penalty in first-half stoppage-time with a low late finish to give Les Bleus a 2-0 victory in Marseille on Thursday.

Griezmann is now three goals clear of the other golden boot contenders, but is still three behind Platini and Cristiano Ronaldo – who he will face at Stade de France on Sunday – in the historical tournament list.

"I am still very far off Michel Platini and hopefully one day I can get closer to that," he told TF1

"I am delighted, very proud and pleased but there is still one match to go to finish with a flourish."

Griezmann's spot-kick came under six weeks after he missed a penalty for Atletico against Real Madrid in the Champions League final at San Siro.

"I missed my penalty in the Champions League final and I really wanted to take a penalty in a big match like that and put it in the back of the net. I am pleased to have taken the decision and scored," the 25-year-old said at his post-match press conference.

"For the second goal I was very composed, I didn't think twice. I was just lurking to see if there was a mistake and it dropped to my feet.

"I am very pleased with the performance the team put in. We knew it would be tough, but we held firm defensively and our goalkeeper played very well. At the other end, we tried to create danger and score goals.

"It is a real team effort, be it the physios, the backroom staff, the other players who give 100 per cent on the pitch. It is thanks to the group we are in the final and we are going to make the most of tonight.

"We are delighted. Both before and after it was great with the fans - it was a fantastic experience and we hope to relive that in the final."

Griezmann insists France will not be taking the challenge of Portugal lightly and thinks the final is too close to call.

He continued: "We need to rest up now and already start thinking about the final. We will start training on Friday.

"It is going to be very tricky. Against Portugal, it is 50-50. Anything can happen in a final, it's a one-off game.

"We are very happy and we can start dreaming about July 10, but we have to keep our feet on the ground. We still have one game to go."