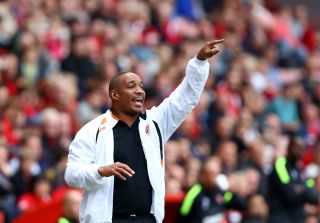 Ince has been handed the suspension and fined £4,000 by the Football Association for charges relating to an altercation in the tunnel in the aftermath of Blackpool's 2-1 Championship victory at Goldsands Stadium on September 14.

Defender Jack Robinson was sent off in the game, but Ince's side clung on to claim the three points thanks to goals from Ricardo Fuller and Neal Bishop.

However, Ince was found to have displayed violent and threatening behaviour and used abusive language towards an official.

His assistant Alex Rae was cleared of charges with regard to the same game.

As a result, Ince will now be unable to attend Blackpool's home games against Wigan Athletic, Blackburn Rovers and Ipswich Town, and will also miss the trips to Nottingham Forest and Birmingham City.

A statement on the FA website read: "Blackpool manager Paul Ince has been given a five-match stadium ban to commence with immediate effect and fined £4,000 following an Independent Regulatory Commission hearing.

"Ince appeared before a Regulatory Commission on Monday after he was charged with three breaches of FA Rule E3, which occurred in or around the tunnel following his side’s game at AFC Bournemouth on Saturday 14 September 2013.

In a statement released on Blackpool’s official website, a club spokesperson said: "Blackpool Football Club acknowledges the decision of The Football Association and will now work closely with Paul and his coaching staff to ensure that the penalty imposed does not affect our short or long-term objectives."