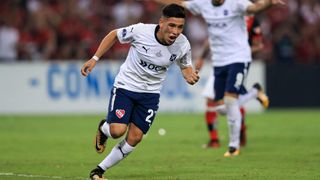 Argentina Under-20 star Ezequiel Barco appears to be on the verge of joining MLS side Atlanta United after his current club Independiente bid farewell to the youngster.

Barco has been a revelation for the club since breaking into the first-team during the 2016-17 Superliga season, scoring five goals and providing as many assists.

He also played an integral part of Independiente's Copa Sudamericana success, stepping up and burying a penalty in composed fashion during the second leg of the final, despite being just 18.

That goal ultimately proved vital in the 3-2 aggregate win and Atlanta reportedly took notice, with speculation linking them with a move for the talented midfielder since December.

They posted: "You came as a boy. You were formed in the club and you leave as a champion. Things happens, but glory is eternal. Thanks and success, Ezequiel!"

It has been widely reported that Barco will cost $15million, surpassing MLS' record signing of Michael Bradley, who joined Toronto FC for $10m in 2014.