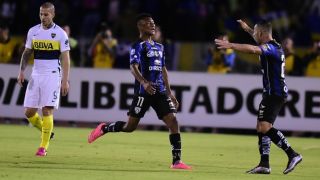 Cinderella story Independiente del Valle continued their remarkable run in the Copa Libertadores, coming from behind to upstage Boca Juniors 2-1 in their semi-final first leg.

Independiente have no history in South America's premier club competition, having languished in Ecuador's third division a decade ago, compared to six-time champions Boca.

But Independiente defied the odds again on Thursday, with second-half goals from Bryan Cabezas and Jose Angulo cancelling out Pablo Perez's 13th-minute opener in Quito.

Carlos Tevez's Boca headed to the Estadio Olimpico Atahualpa as the only unbeaten team remaining in the Libertadores and they looked on track to extend that run thanks to Perez.

Played in by Fernando Zuqui, Perez curled the ball into the corner of the net less than 15 minutes into proceedings.

Independiente pressed forward in search of an equaliser and while it was not forthcoming in the first half, they did draw level just past the hour-mark.

Christian Nunez crossed into the box, which evaded everyone after the Boca defender slipped at the back post, allowing Cabezas to control the ball before curling his shot home.

And Angulo completed the comeback in the 76th minute, with Independiente's joint-leading scorer scooping the ball between two opponents and unleashing a powerful strike beyond Agustin Orion for his sixth goal of the tournament.

Boca did have chances to snatch a second away goal but Tevez saw his effort flash wide of the post, while unmarked Uruguay international Nicolas Lodeiro blazed his shot over the crossbar four minutes from time.