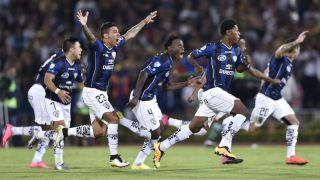 Independiente del Valle coach Pablo Repetto is expecting an open encounter in the first leg of the Copa Libertadores final against Atletico Nacional on Wednesday and insists his side will be going out to attack.

Independiente qualified for the final after eliminating Argentine giants Boca Juniors in the last four, having defeated Pumas UNAM and River Plate in the previous knockout rounds.

Their campaign is made all the more remarkable by the fact this is their first appearance in South America's premier continental competition, having been languishing in the third division of Ecuadorian football just a decade ago.

With a total of 10 goals from their six knockout games against well-established opponents, Independiente have well and truly proved their status as worthy finalists, and Repetto wants his team to continue their attacking style of play in the decider.

"No one is really confident about [the result] of a final. Maybe they are the favourites, but we have faith in the final, and in finals you have to go out to win them," the Uruguayan coach said.

"We are keeping nice and calm, which is the most important stance, but every step we have taken has cost us and we will deal with it and continue in the same line.

"I see the game as an open one. Both teams will come out to look for the win. We have similar characteristics in our offensive games, with quick players and transitions."

Independiente normally play their home games in Sangolqui at the Estadio Municipal Ruminahui - which has a capacity of just over 7,000 - but moved to the 40,000-seater Estadio Olimpico Atahualpa for the knockout stages.

Repetto's side have not lost when playing as the home team all tournament and, despite their underdog status during the campaign, may have to bear the tag of favourites for the first leg.

However, their opponents Atletico Nacional are no pushovers, with the Colombian side knocking out Huracan, Rosario Central and Sao Paulo on their way to a third Libertadores decider.

Coach Reinaldo Rueda is experienced internationally, having taken both Honduras (2010) and Ecuador (2014) to the World Cup, and is going into the two-legged final with the ambition to take Atletico to the Club World Cup in December.

"We are a coaching staff that has made it to two World Cups, and now I want to go to the Club World Cup," the Colombian said.

But Rueda knows Independiente will not be an easy team to face, telling La Deportiva: "We are coming up against a rival who are on a great level.

"For us it is no surprise [Independiente are in the final]. It's their reward for many years working on a project sporting and social-wise."