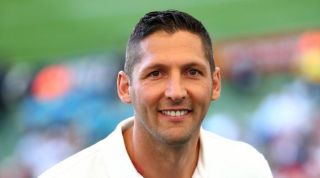 NorthEast had not won any of their previous six matches before the visit of high-flying Chennaiyin, though they showed no signs of such wretched form on Thursday.

Durga Boro put the home side ahead with 10 minutes gone, scoring after Eric Djemba-Djemba's headed clearance had struck Seiminlen Doungel.

Massamba Lo Sambou doubled their lead 11 minutes later as he knocked in from Koke's free-kick and he netted again shortly after, finding the net from another set-piece delivered by the Spaniard.

NorthEast marquee player Joan Capdevila put his side's position in doubt when he picked up his second yellow card with 18 minutes, but the hosts were already cruising and victory boosts their chances of reaching the final series.

Atletico could have gone top with three games left had they beaten hosts Pune by two goals on Saturday, but they were held to a 1-1 draw.

Zico's Goa moved up to third with a comfortable 3-0 win over visitors Kerala Blasters on Wednesday, leaping above their opponents with the victory.

After a quiet first half, Goa eventually broke the deadlock in the 63rd minute as substitute Miroslav Slepicka scored a free-kick - and Andre Santos swiftly doubled their advantage.

Slepicka pounced on a David James error 11 minutes from time to score his second of the day, with the former England goalkeeper subsequently kicking the goal frame in frustration and hurting himself.

Hans Mulder edged the Dynamos ahead just before the break, before Mads Junker and Gustavo Marmentini extended their lead in the first 15 minutes of the second half.

Abhishek Yadav pulled one back for Mumbai four minutes from the end, but Manish Bhargav restored the three-goal cushion in the closing stages.