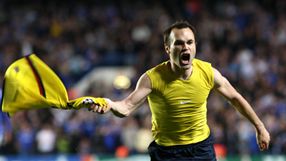 The Spain midfielder smashed a long-range shot under the bar to send Pep Guardiola's team through on the away goals rule, 1-1 on aggregate, after a semi-final where they had been stifled for long periods and a second leg where they were down to 10 men.

"To be knocked out at the gateway to a final is very painful," Iniesta told a news conference on Monday, two days before Barca visit Stamford Bridge for the first leg.

"We return to face them again and I am sure their desire to beat us and be in the final will be very strong.

"Football always gives you second chances but I hope everything works out well for us this time as well."

Barca went on to win their third European Cup, beating Manchester United in the final in Rome that year, but the manner with which they squeezed past Chelsea was the cause for much debate.

Arch Barca-baiter, Real Madrid coach Jose Mourinho, has described the second leg as the "scandal of Stamford Bridge" when Norwegian referee Tom Henning Ovrebo waved away a number of possible penalty shouts for his former club.

More significantly, it was Chelseas's organised defence and spoiling tactics which kept Barca at bay and restricted them to barely one shot on target, Iniesta's in the 93rd minute, which may linger longer in the minds of Barca players.

"I prefer to remember how we never gave up, how we kept our options open to the last minute and how we had the luck to finish off a play at the very end," said Iniesta who also scored the winner for Spain in the World Cup final in 2010.

"I don't think we need to keep going back over these things. Some people see one thing, others see something else."

Barca weathered the storm at Stamford Bridge, sticking to their possession-based passing football, and three years further on have honed that style to perfection reaching the semi-finals in 2010 and winning the competition again in 2011.

"Time passes and we return again in another situation," Iniesta said.

"Chelsea have more experience. They were strong in 2009 and they will be strong again this year, intense and dangerous. This will be magnified by the atmosphere in their stadium.

"We know it is a game of two legs, but our intention is to go for the win."