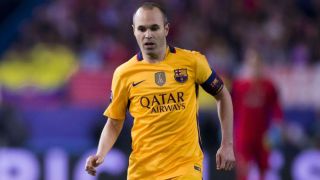 Andres Iniesta has welcomed the fierce battle for a place in Barcelona's midfield this season and believes the added competition can only be a good thing for the club.

And head coach Luis Enrique has added to his options in the close-season by bringing in Valencia's Andre Gomes and re-signing Denis Suarez from Villarreal.

But Spain international Iniesta, who has won eight LaLiga titles and four Champions League medals during his career, feels the new arrivals will only enhance Barca's chances of competing on all fronts again next season.

"Today it would cost me to say that I am concerned because I think that competition is very healthy and very positive for the team to reach its objectives," he told Marca.

"I still have the enthusiasm and the desire to remain important to my club.

"And I'm sure we all think the same, to contribute with our work, our quality, our desire to be part of the team and continue to make big things happen this season."

On Gomes and Suarez, Iniesta added: "They have a common denominator. They are young players with the enthusiasm to play for a team like Barcelona, the ideal place to continue to grow."