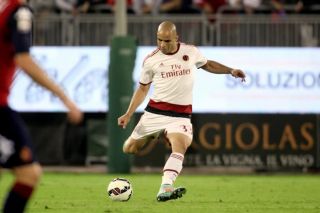 The first Milan derby of the campaign takes place this weekend, but Filippo Inzaghi has been dealt a blow by the absence of the Brazlian centre-back.

Milan confirmed the news on Saturday, with the former Chelsea and Paris Saint-Germain man sustaining the injury in training on Friday.

"AC Milan announces that during training yesterday afternoon Alex suffered a hip flexor injury to the medial aspect of the right thigh," read a statement on the club's official website.

Sunday's clash will be Inzaghi's first derby in charge of Milan, while Roberto Mancini will get his second stint at Inter under way.

Mancini's return for another spell at the club was confirmed earlier this month as he replaced Walter Mazzarri at the helm.