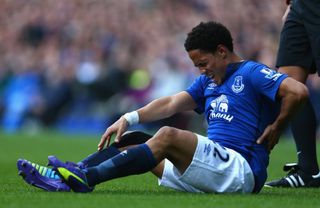 Both players limped off in Saturday's 2-2 draw with Arsenal at Goodison Park, as Pienaar was replaced by Leon Osman after just 10 minutes with a groin complaint while Lukaku lasted 76 minutes before coming off with a toe problem.

Jose Mourinho's Chelsea visit Merseyside next weekend and Everton manager Roberto Martinez has confirmed that midfielder Pienaar will definitely sit out, but the Spaniard was more hopeful on striker Lukaku - who joined from Chelsea in a £28 million deal in the close-season.

"They have both been assessed," Martinez said on Tuesday. "Stevie P [Pienaar] is going to miss the game at the weekend. He is the one that is going to take a little bit of time.

"Stevie is going to be out and he is going to join Arouna Kone and Bryan Oviedo who are the only other two players that are not available.

"Romelu, we will keep assessing him. He has reacted well in the 48 hours after the game.

"At the moment it is too early to know if he will be available at the weekend but I am quite positive with Rom."

One player who will compete for a place is midfielder Darron Gibson, who has not played a competitive match since damaging his cruciate knee ligament playing for the Republic of Ireland last October.

The 26-year-old was used sparingly during pre-season, but the ex-Manchester United man is in contention for Saturday.

"Darron Gibson is fully fit and I consider him part of the squad," Martinez continued. "He will be ready from now on to join the group and compete for a place."