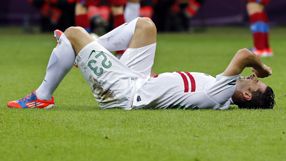 Postiga, Portugal's first-choice centre-forward, was carried off after pulling up late in the first half against the Czechs in Warsaw.

Portugal will face the winners of Saturday's quarter-final between France and Spain in the first semi-final on Wednesday.

The Portuguese Football Federation had already said Postiga would miss the semi-final. He was replaced against the Czechs by Hugo Almeida.