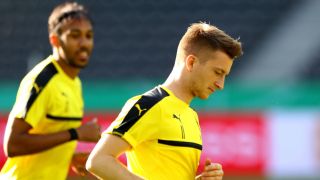 The Germany international suffered a partial tear of the right cruciate ligament during Dortmund's DFB-Pokal final win over Eintracht Frankfurt in May.

Reus underwent surgery 10 days later and is not expected to be back playing again until early in 2018, leaving him in a race to be ready for the World Cup.

Recent media speculation suggested the player had suffered a setback during his rehabilitation process, but Dortmund insist Reus is progressing well on his long road to recovery.

"I'm completely on track with my plan. The rehab has been great so far," Reus said.

The 28-year-old was limited to 24 appearances in all competitions last season, although he still found the net 13 times.