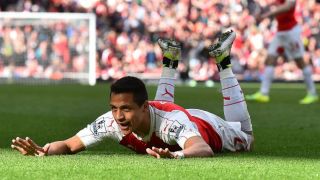 Alexis Sanchez will miss Arsenal's tour of California due to the ankle injury he sustained in the Copa America final.

Sanchez was taken off in extra-time of Chile's penalty shoot-out win against Argentina after a heavy challenge from Gabriel Mercado.

He will miss the games against MLS All-Stars and Chivas but Gunners boss Arsene Wenger is confident it will not jeopardise his chances of being fit for the start of the new Premier League season with Arsenal's opening game coming against Liverpool on August 14.

"Alexis will not go because he had an ankle injury," Wenger told Arsenal Player. "It is not too bad but I will leave him behind."

The members of the Wales, Germany and France squads who played at Euro 2016 will also stay behind, as will defender Gabriel.

Wenger added: "The players who won’t make it are the players who went very far in the European Championship, such as [Aaron] Ramsey, [Mesut] Ozil, [Olivier] Giroud and [Laurent] Koscielny.

"I left Gabriel behind today because he has tonsillitis and is infected. He cannot travel."