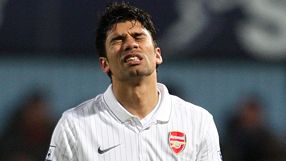 The mood of a club can change quickly in the helter-skelter Premier League and while United's League Cup semi-final win over Manchester City and the electrifying form of Wayne Rooney has them on a high, Arsenal need a quick pick-up.

Last weekend's FA Cup defeat at Stoke was a blow and on Wednesday a 0-0 draw at Aston Villa, while on the face of it not a bad result, left Arsene Wenger's side slightly adrift in the title race.

Both will miss the visit of United.

"We want to win our next home game - it is as simple as that," Wenger, whose side face Chelsea and Liverpool in their next two games, told Arsenal's website.

"We go from game to game because if you think too much ahead it is not too good."

Vermaelen's injury means that veteran defender Sol Campbell could be called into action for a third time in a week.

"Sol has not played for six months and just in three days he has had two big games, so I will have to see how he recovers," Wenger said.

Defeat for Arsenal on Sunday would leave them four points behind United and possibly five behind Chelsea who crucially have also played a game less.

United's 3-1 victory over City, for a 4-3 aggregate win, was sealed by a last-gasp header by Rooney who is enjoying the best goal-scoring form of his career at just the right time.

The England striker has 21 goals this season and has netted 13 in his last 13 games in all competitions.

"His control, his leading of the line, his penetration is absolutely fantastic," Ferguson said of the man who is pivotal to United's hopes of a fourth consecutive title."

Chelsea travel to struggling Burnley on Saturday fresh from an impressive 3-0 victory over Birmingham City on Wednesday which put them back on top of the table.

Carlo Ancelotti will be able to call on Ivory Coast duo Didier Drogba and Salomon Kalou after they returned from the African Cup of Nations - not that they have struggled without them, winning all four matches in their absence and scoring 17 goals in the process.

"I think we need Drogba back, he is a fantastic player," Ancelotti said.

"We did very well in January. I want to thank my players because without the African players we could have had problems but they did very well."

While Chelsea, United and Arsenal scrap for the title, the battle for fourth place and the chance of Champions League football is also raging.

Tottenham, who are in fourth spot with a three-point lead over Liverpool, travel to Birmingham while Liverpool host Bolton.

Manchester City, back in sixth but with two games in hand of the sides above them, host bottom club Portsmouth.