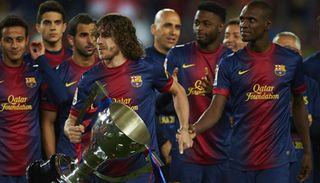 "I doubt I could stand another season of injuries like the one I have just had," the defender told a news conference on Friday.

"If the problems continue next season I will have to quit. These things happen in football."

The 35-year-old missed Spain's triumph at Euro 2012 after having surgery on his right knee last May, and fractured his cheekbone in Barca's second league game at Osasuna in August.

Twisted ligaments in his left knee sidelined him again in September, and Puyol dislocated his left elbow in October.

A nagging knee problem further restricted his appearances and finally he went under the knife again in March for surgery on the cartilage in his right knee in the hope he could return for the end of the campaign.

He has only make 13 appearances in La Liga and four in the Champions League this season.

Famous for making rapid recoveries from injuries, Puyol sounded a more cautious note as he looked ahead to next year.

"My objective is to arrive 100 percent fit for the new season," he said.

"My idea is to complete the three years on my contract and I hope to play until I am 40 and retire here."

Puyol won his 100th Spain cap in a 3-1 friendly win over Uruguay in Doha in February, but has been left out of Vicente del Bosque's squad for next month's Confederations Cup in Brazil.

"Del Bosque has always kept in touch with me," Puyol added, while dismissing a question over whether he was considering ending his international career.

"We'll see what happens. Now is not the moment."

La Liga champions Barca play their last game of the season at home to Malaga on Saturday, when a victory would enable them to match the league record of 100 points set by Jose Mourinho's Real Madrid last year.