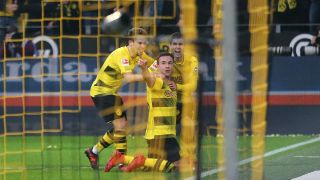 Bosz was sacked by Dortmund after their positive start to the Bundesliga campaign spiralled downwards, while they also exited the Champions League.

After throwing away a four-goal lead against rivals Schalke to draw 4-4, a 2-1 defeat to Werder Bremen signalled the end for Bosz, with Stoger appointed until the end of the season.

The former Cologne boss picked up back-to-back victories over Mainz and Hoffenheim before the mid-season break and Gotze is convinced Stoger can be the difference in the second half of the 2017-18 season.

"Peter Stoger is very, very inspirational, communicating a lot, being open, and approachable for the players," he told Bild.

"I think he is a great solution and a great coach.

"I am convinced that he can give us the necessary stability and will advance us again in the second half of the season."

Dortmund will need a dramatic upturn in form to catch Bayern Munich, though, with the leaders 13 points clear after 17 matches.

Lifting a sixth Bundesliga title and third with Dortmund may be a tough ask, but European success is something Gotze has got his eye on after they dropped into the Europa League.

He added: "Once you have won a title, you want more and more of these experiences, of those emotions.

"And the titles you have not won yet, in my case Europa League or Champions League, are definitely trophies that I want to win."