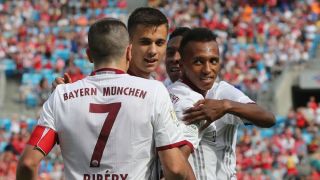 Julian Green enjoyed a happy American homecoming as he scored a first-half hat-trick in Bayern Munich's 4-1 thrashing of Inter in the International Champions Cup.

United States international Green has struggled to break into Bayern's first team and had been linked with a loan move away from the Allianz Arena in the close-season.

But head coach Carlo Ancelotti stated this week that the 21-year-old has a role to play and the forward was in sublime form in the continued absence of Robert Lewandowski and Thomas Muller at the Bank of America Stadium in Charlotte.

Green turned home David Alaba's cross to put Bayern ahead, before Franck Ribery quickly made it 2-0.

A clinical finish from Green stretched the lead further and a shell-shocked Inter were 4-0 down at the break when he completed his hat-trick inside 35 minutes.

The Bundesliga champions failed to replicate the same performance after the break, but the damage had been done long before Mauro Icardi netted a 90th-minute consolation.

Ancelotti, whose side lost on penalties to AC Milan in their Champions Cup opener after a 3-3 thriller, can now look forward to a reunion with former club Real Madrid on Thursday.

Roberto Mancini, meanwhile, has much to ponder ahead of the Serie A season with Inter having been completely outclassed in North Carolina.

It took Bayern just seven minutes to break the deadlock as Alaba's exquisite left-wing centre was side-footed home by the sliding Green.

Bayern were dominant in all departments and it was 2-0 six minutes later. Fabian Benko showed great footwork to the drag the ball to the byline with his left foot and cut back with his right for Ribery to tap in.

Inter imploded on the half-hour mark when some amateur defending at an aerial ball near the halfway line left Bayern with a two-on-one and Ribery slipped in Green, who coolly slotted home into the bottom right-hand corner from the edge of the box.

And Green completed his hat-trick in the 35th minute by tapping into the unguarded net after a superb ball across the face of goal from Benko.

Inter showed some improvement after the break with Bayern dropping off the pace and Rodrigo Palacio cut onto his left foot and got a shot away at goal that Alaba blocked.

Mancini brought on Icardi for the last 20 minutes, the Argentina striker having not played against PSG amid rumours he is being lined up by Napoli to replace Gonzalo Higuain, and he bagged a late strike by capitalising on an Alaba error and calmly side-footing home when one-on-one with the goalkeeper.