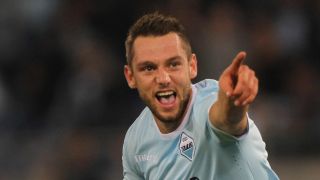 Stefan de Vrij has joined Inter on a five-year deal, it has been confirmed by the Serie A club.

Netherlands international De Vrij had already confirmed his departure from Lazio at the end of his contract, with the move formally completed on Monday.

Defender De Vrij memorably conceded a penalty for fouling Mauro Icardi on the last day of the 2017-18 season, an incident that directly contributed to Inter qualifying for the Champions League at Lazio's expense.

"It was destiny. All players are professionals, I don't think he fouled me on purpose," Inter captain Icardi said to Mediaset Premium. "He tried to stop me scoring, it was just destiny."

Inter are also expected to complete the free transfer signing of Kwadwo Asamoah, with the Serie A official website having confirmed he has joined the Nerazzurri.

Asamoah, a versatile player who can feature in defence or midfield, won six successive Serie A titles and four consecutive Coppa Italia trophies at Juve.