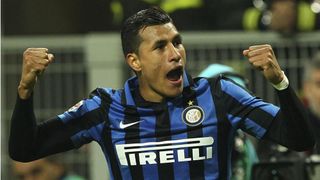 Inter defender Jeison Murillo believes Inter are duty bound to embrace talk of ending their six-year wait for a Serie A title.

The San Siro club are without a Scudetto since winning their fifth in a row in 2010 - the first title in that run awarded through the courts in 2006 following the Calciopoli scandal.

But Inter find themselves at the summit of the Italian top flight after 17 matches of the 2015-16 season, sitting one point clear of closest challengers Fiorentina and Napoli.

Defending champions Juventus are a further two points adrift in fourth after overcoming a difficult start to the campaign.

"At Inter [the Scudetto] is something that must always be talked about." Murillo told Gazzetta dello Sport ahead of a return to domestic action at Empoli on Wednesday.

Asked whether Serie A would become a straight race between Inter and Juve, Murillo added: "We are only focused on ourselves."

Murillo's performances in the Inter back line have seen him linked with the likes of Real Madrid, Barcelona and Liverpool.

"It is nice to read certain things," he commented. "However, I am professional and respect the shirt I wear, until the last drop of sweat."