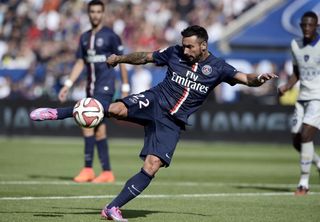 The 29-year-old has been a regular in the Paris Saint-Germain first team since signing from Napoli in 2012, but is rumoured to be on his way out of the French capital.

However, Thohir says he is unable to comment on specific deals until they become a reality.

"I don't know. I don't want to promise anything until we've signed," he said.

"We can't announce anybody until we've signed them.

"There are three days to go, and then there's the window in January too.

"In any case I believe that with the acquisition of [Nemanja] Vidic, Dodo, [Yann] M'Vila, [Gary] Medel and [Pablo Daniel] Osvaldo we have a well-balanced team."

Inter qualified for the UEFA Europa League group stage with 9-0 aggregate victory over Stjarnan of Iceland on Thursday.