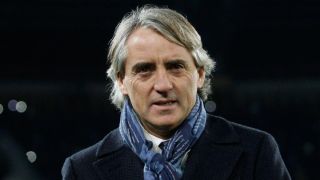 With the spat between Roberto Mancini and Maurizio Sarri seemingly over, Inter turn their focus back to matters on the pitch in what will be their coach's 200th Serie A game in charge when they host Carpi on Sunday.

Inter moved into the semi-finals of the Coppa Italia on Tuesday with a 2-0 win at Maurizio Sarri's Napoli.

However, the result was overshadowed by a sideline spat between Mancini and Sarri in which the latter was accused of using the Italian homophobic slurs "frocio" and "finocchio" towards the Inter coach.

Sarri admitted it was "possible" he used such language and apologised, saying he was simply "irritable" and meant no offence.

Inter and Mancini have accepted his apology and will look to stay in touch with league leaders Napoli with victory over relegation-threatened Carpi at San Siro.

Macnini's men are four points adrift of Napoli and two behind defending champions Juventus, who take on Sampdoria and Roma respectively this weekend.

And Adem Ljajic – scorer of the second goal at the Stadio San Paolo that was followed by the incident involving Mancini and Sarri – wants Inter to replicate the performance they produced against Napoli.

He told Inter channel: "We need to keep going, we have a big game coming up against Carpi.

"They were saying we're on bad form, but I don't think that's the case, we haven't had much luck.

"We're Inter and we should always play like this."

Mancini has the benefit of a fully-fit squad to choose from, but that is not the case for Carpi, who have 17 points and are four adrift of safety in 18th place.

Isaac Cofie and Riccardo Gagliolo are suspended for the visitors as they attempt to extend their run of three league games without defeat.

Having held Lazio to a 0-0 draw this month, Carpi have since beaten Udinese and Sampdoria 2-1 at home, midfielder Lorenzo Lollo scoring in each of those games.

A late Stevan Jovetic penalty was the difference in the reverse fixture back in August as the Montenegro international netted his second to deny Carpi a point.

Last week's visit to San Siro ended in disappointment for Carpi, losing 2-1 to AC Milan in the Coppa Italia and, with the strugglers having failed to score in three of their last four league away games, Fabrizio Castori's men are likely to find it difficult to better that result this time around.

- Inter have lost their last two home league games: they haven't lost three home games in a row since April 2013.

- In the last 10 league rounds, Inter's Samir Handanovic has saved 48 of the 53 shots he faced, conceding only six goals (one own-goal).

- In their last five league matches, Inter have failed to register more shots on target than their opponents.

- Mauro Icardi's next goal will be the Inter striker's 50th in Serie A.