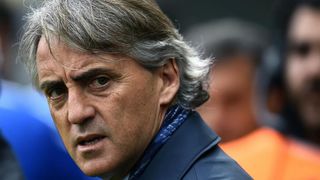 Roberto Mancini is adamant Inter will give it their "very best shot" to hunt down Roma in the race for Champions League football as they prepare for a potentially volatile Serie A clash with Napoli on Saturday.

The Nerazzurri need a victory at San Siro to keep their faltering quest for third place and Champions League qualification on course, having won just one of their last three outings.

The match sees Mancini go head-to-head with Maurizio Sarri for the first time since the Napoli coach was suspended for using a homophobic slur towards his opposite number during Inter's 2-0 Coppa Italia victory at Stadio San Paolo in January.

Mancini has stressed that he will shake Sarri's hand and the former Manchester City boss is keen to focus on Inter's bid to catch Roma.

A 1-0 win at Frosinone last time out coupled with Roma's 1-1 draw against Bologna means the Milan club are six points adrift with six matches remaining, and Mancini insists his team have not thrown in the towel.

"There are six games left to play and we need to believe we can. We'll give it our very best shot," he told Inter's official website.

Inter's failure to keep pace in the Serie A title race has led to rumours that Mancini could be replaced at San Siro, but forward Eder - who joined from Sampdoria in January - praised his coach.

"He's a coach that keeps everyone on their toes, so we all need to be in good shape and make sure we're ready at all times," he added.

"His career speaks for itself - the things he's done and everything he's achieved."

Eder has yet to score in nine Serie A appearances for Inter, but he remains happy with his move to San Siro.

"I've been in Italy for 11 years so I already knew about Inter's great history, partly from having faced the club many times," he said.

"When you play for Inter, you're even more aware of how big the club is - there are fans everywhere in Italy and throughout the world."

For Napoli, a victory at San Siro is crucial if they are to maintain their faltering bid to keep pace with defending champions and leaders Juventus.

With just six matches remaining they are six points adrift of Massimilano Allegri's men and Napoli are once more without suspended top scorer Gonzalo Higuain in Milan.

However, in his absence Napoli turned over bottom club Verona 3-0 with Higuain's replacement Manolo Gabbiadini on the scoresheet.

- Napoli have gone unbeaten over their last six league meetings with Inter (W3 D3).
- Inter have lost only one of their last 12 home games against Napoli in the top-flight (W9 D2).
- In the reverse fixture, Napoli scored and Inter conceded their fastest goal in this Serie A campaign (Gonzalo Higuain netted after 64 seconds).
- Against Frosinone, Inter kept a clean sheet after eight consecutive league games without one. Overall, only Juventus (18) have kept more clean sheets than the Nerazzurri (14) in the current Serie A.
- Napoli have won only one of their last four away games in the league, after having collected 12 points in the previous four.
- Manolo Gabbiadini has scored eight goals and delivered three assists over the last 11 games he has started for Napoli in all competitions.